How to Stop Invalid Clicks and Protect Your Budget

Every fifth click on a PPC (pay-per-click) ad is fraudulent. This makes click fraud one of the most pervasive ad fraud techniques.

Just as you have access to an abundance of PPC (pay-per-click) networks to choose from, so do fraudsters. Click fraud and invalid clicks cost digital advertising organizations millions in lost revenue every year. But here’s where it gets tricky when it comes to stopping invalid clicks -- not all invalid clicks are fraudulent.

Click fraud is the act of fraudulently clicking on PPC ads with no intention of finding out more about or buying a business’s products or services, with the main aim of attempting to exhaust an advertiser’s budget. For this reason, it is often carried out by fraudulent publishers or by competitors attempting to drain budgets quickly.

However, some of the vehicles fraudsters use to perform click fraud are:

These clicks can all be classified as invalid clicks, since they are considered Sophisticated Invalid Traffic (SIVT). SIVT is considered malicious since it is performed via malware, bad bots, stacked ads, and fraudulent proxy traffic.

However, there are also instances of invalid clicks that are not considered particularly malicious. This invalid traffic is known as General Invalid Traffic (GIVT). These include accidental ad clicks by real users and clicks from automated web crawlers and bots, and since they do not intend to mimic human behavior, are not considered fraud,

Here are just some of the negative impacts of invalid clicks: 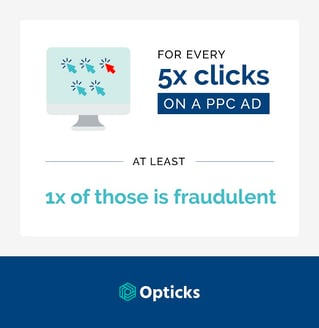 How to stop invalid clicks

The take first step in stopping invalid clicks is detecting them when they occur. As click fraud and invalid clicks have become more prevalent, ad platforms, such as Google, have been forced to address them.

Let’s take a look at how some of the most common ad platforms detect invalid clicks.

Using its invalid click detection filter, Google can block IP addresses that are carrying out invalid clicks on paid ads (usually those that deliver no conversions, have high bounce rates, and spend little time on the page). Google attempts to automatically filter invalid clicks from reports and payments so that users are not charged for those clicks.

However, advertisers might still see a percentage of invalid clicks slipping through the system and not being automatically refunded.

Ad networks (and affiliate networks) are a context where fraud is very prevalent. Although many of these networks do not properly monitor for click fraud, a few selected others have developed initial checks to reduce click fraud. Some of them are visible to the end customer, and some of them are just included as operational processes that can optimize for legitimate media buying.

Even though these platforms aim to prevent fraud, their systems are not robust enough to stop every invalid click. You are ultimately responsible for putting an advanced system in place to protect your organization’s best interests.

How to prevent invalid clicks and ad fraud

Since Google makes most of its profit from ad revenue, it’s in their best interests to prevent click fraud, and thus has many solid anti-click fraud processes. However, other ad platforms that claim to go out of their way to eliminate click fraud still allow many invalid clicks to slip through the cracks.

Here are a few other ways to prevent invalid clicks from eating your ad budgets.

You can manually add suspicious IP addresses to an IP exclusion list using Google Ads. This is, however, a time-consuming activity.

By drilling down into the data by source of traffic, you may spot certain publishers whose traffic is fraudulent. In these cases, it’s best to block traffic from these publishers to stop malvertising and increase your ROI.

Not only do professional anti-fraud solutions make sure you’re not blocking valid users, but they also proactively prevent click fraud before it begins.

Blocking IP addresses is an important exercise, but one without an end in sight. Once you block a handful of IP addresses, more often than not, fraudsters will simply obtain new ones and continue to perform click fraud on your PPC ads.

Anti-fraud solutions are specialized third parties, with deep knowledge of traffic and marketing events. They scan the traffic and root out sources deemed to be illegitimate traffic. This evidence, in the form of reports and charts, can be used by businesses to defend their position in conversations with certain ad networks.

Unfortunately, click fraud is one of the easiest types of ad fraud to commit, which in turn makes it one of the hardest to prevent.

The ad tech industry can’t rely on Google alone to detect and stop invalid clicks. Dedicated anti-fraud software is the only complete solution that can prevent click fraud and invalid clicks before they have a chance to damage your ad budgets. To learn how Opticks can protect your organization from invalid clicks, contact our expert team here for a free demo.