How to Demand Transparency in Advertising From Media Partners

In response to low ROAS rates linked to a lack of transparency in advertising supply chains, advertisers have begun to keep agencies and media partners at arm's length and establish in-house agencies to gain better clarity on advertising efforts and facilitate cost efficiencies and savings.

Here, we take a look at the key consequences of a lack of transparency in advertising, early indicators that your organization might be experiencing these consequences, and finally, how to gain transparency from your agencies and media partners.

What does transparency in advertising mean?

Transparency in advertising means just that: You have clear insight into where your ad campaigns are displayed, the methods in which your media partners are serving them, and how much return on investment or return on ad spend your organization is receiving.

Although this sounds like a bare minimum requirement from your agencies and media partners, a third of advertisers are currently concerned about a lack of transparency and trust in advertising.

Many of these concerns center around ad fraud, media rebates, a lack of transparency into media practices, and a lack of access to data.

The 3 key consequences of a lack of transparency in advertising

Tired of agencies taking kickbacks and underpaying publishers, the advertising powerhouse not only reevaluated their existing agency contracts but, in a bid to cultivate transparency, called on the digital advertising industry as a whole to join together to overhaul the supply chain as it stood.

Here’s what a lack of transparency in advertising can mean for your business:

AVBs are usually cash incentives or volume discounts that are offered in exchange for larger expenditure on media properties. Such practices muddy the water when it comes to your agency’s impartiality and focus.

And since many organizations are unaware of the prevalence of AVBs, a significant share of their ad spend is never recouped.

Advertisers should not have to sacrifice campaign insight and knowledge in return for performance. Unfortunately, a lack of transparency has often been a trade-off for better campaign performance.

When you have no direct insight into performance data and interfaces, or when agencies provide indirect reports that may have been tampered with or their results inflated, you have no awareness of where your ad spend is being allocated or where your ads are being seen.

When you don’t have access to raw data, it’s easy for media partners to put a good spin on numbers that you may otherwise find disappointing.

For example, without access to raw data, you have no insight into what parameters the agency uses to calculate ROI, nor do you have access to consumer data to inform future ad campaigns.

From draining ad budgets rapidly to impacting spend optimization efforts, ad fraud is highly damaging to the marketing function as a whole.

There are several indications that your marketing and advertising efforts are being impacted by a lack of transparency in advertising. 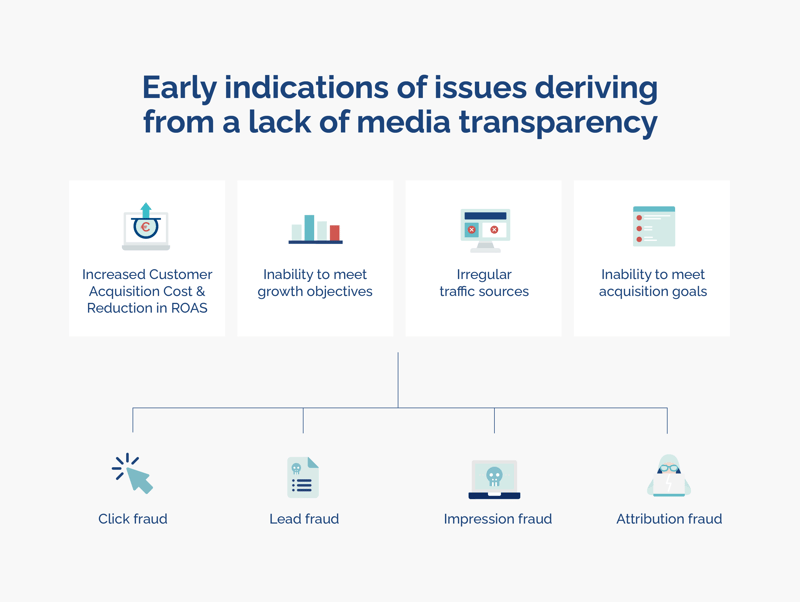 Although you may not immediately attribute the following issues to click fraud, they are likely indications that click fraud is at play:

The following are common signs of lead fraud:

Out-of-target paid leads (e.g. from countries where you don’t have active campaigns running)

Other indicators across the advertising funnel

All of the indicators above can have a widespread impact on the advertising funnel as a whole. These impacts can include:

How to demand transparency from your agencies and media partners

The lack of transparency in advertising isn’t going away on its own. It’s time for advertisers to take a stand against the hidden practices that are ultimately hurting the success of their ad campaigns.

Cost savings and improved competitiveness are also two advantages that come from agency transparency. Dominois goes on to say that “Securing significant improvements in a media agency’s transparency allows an advertiser to answer the fundamental question: “Are my media prices competitive?”. Advertisers can also reduce their overall spend by identifying up to 70% cost differences in the media pricing it’s offered compared to its competitors”.

Reevaluate and renegotiate your agency contracts

Before implementing any changes, take a look at the Association of National Advertisers’ “Master Media Planning & Buying Services Agreement” contract template. This template has been designed with advertisers in mind and can be used by advertisers when developing their own agency agreements.

Once you’ve read through the contract template, there are a few other contractual elements to consider when drawing up new clauses to allow for increased transparency:

1. The right to full disclosure and receipt of AVBs, rebates, and unspent ad spend (and the right to terminate the partnership for failure to disclose)

Not only should your contract cover the disclosure of any AVBs, but it should also ensure that you as the advertisers will receive the full value of any AVBs, including both cash rebates and free advertising space. You should also reserve the right to be refunded any unspent ad budget.

Failure to disclose data or AVBs, or a failure to provide remedies for reported underperformance should also be included in your contract.

2. The right to access campaign management systems and raw data

Your agencies should not have the right to limit or prohibit your access to the interfaces used to monitor your campaigns (e.g. DoubleClick Campaign Manager or Google Analytics). Embed your right as the advertiser to make backend changes to campaigns within your agency contract.

You should also reserve the right to access any raw data or reports such as invalid traffic, ad server, and DSP reports.

3. The right to conduct financial and media audits

As well as conducting financial audits to establish true ROI, you should also embed the right to perform media audits using independent tools to detect any incidences of ad fraud.

If your current media partners are resistant to adding and adhering to the clauses above, it’s time to start thinking about reaching out to new agencies who are more transparent and are satisfied with the clauses above.

If you struggle to find agencies who are happy with the clauses above, it’s worth considering in-housing your advertising and media buying operations to save money and protect your ad campaigns.

Demanding transparency from your agencies is essential if you want to get true value from your advertising campaigns. Over the next few years, only organizations who are clear that they won’t stand for paying more for fewer returns will be able to navigate and survive.

As well as demanding transparency, you need to consider a holistic ad fraud prevention function to prevent fraudsters from siphoning your ad budgets. Anti-fraud solutions like Opticks help you gain true transparency into your media partners, protect your ad spend, and enjoy better levels of ROAS.

To find out more about how the expert team at Opticks can help you gain transparency into your media partners and optimize your ad spend, contact us now.